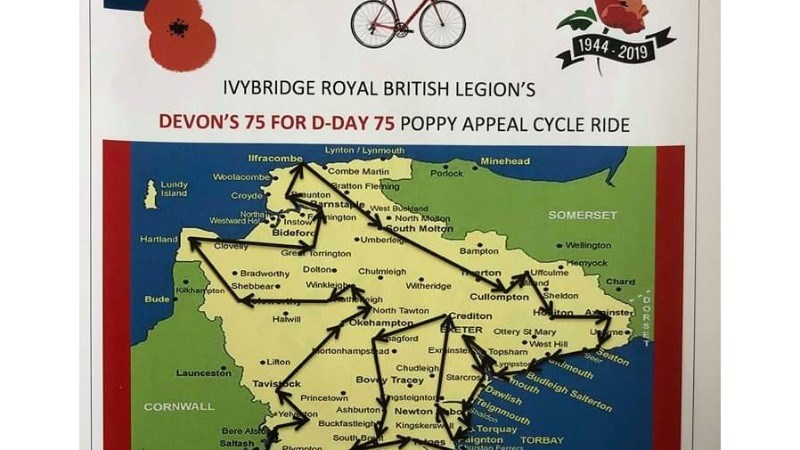 Our very own Head Greens Keeper Vince Vosper and his brother George will be taking part in the 500 mile round Devon Cycle Ride, stopping at  75 War Memorials along the way (each one represents the 75 years since D day). Vince will be doing 95 miles on Saturday and 85 miles on Sunday and then will be using his van as support for the other riders. George, his brother who is a Major in the army will be doing it all with his colleagues.

They will be raising money to support Ivybridge Royal British Legion and it’s Poppy Appeal.

The Ivybridge branch of the Royal British Legion have raised an incredible £27,000 this year thanks to the fantastic generosity of our local community. Chairman Dermot Roberts and brothers George and Vincent Vosper plan to take that total to £30,000 by raising funds through this 500 mile round Devon Cycle ride.

If you can help them, the money you give will go towards the fulfilling the Legions mission to “Live On To Remember The Fallen” and support the future of the living.

To make a donation to this amazing event select here: Just Giving

George is in his early 50s and has been in the army since he was 16. He has been to Northern Ireland for 2 Tours and was involved in the plane crash that took place in 1989 on the M1 whilst on his way back to Northern Ireland. He sustained multiple injuries from the crash after he just finished his commando entry course. He went on to retake his commando course and then joined 42 Commando. He served in both Gulf Wars rising through the ranks from Private to Major. Vince is very proud of his brother who is now a full time officer in the Rifles in Exeter Barracks.