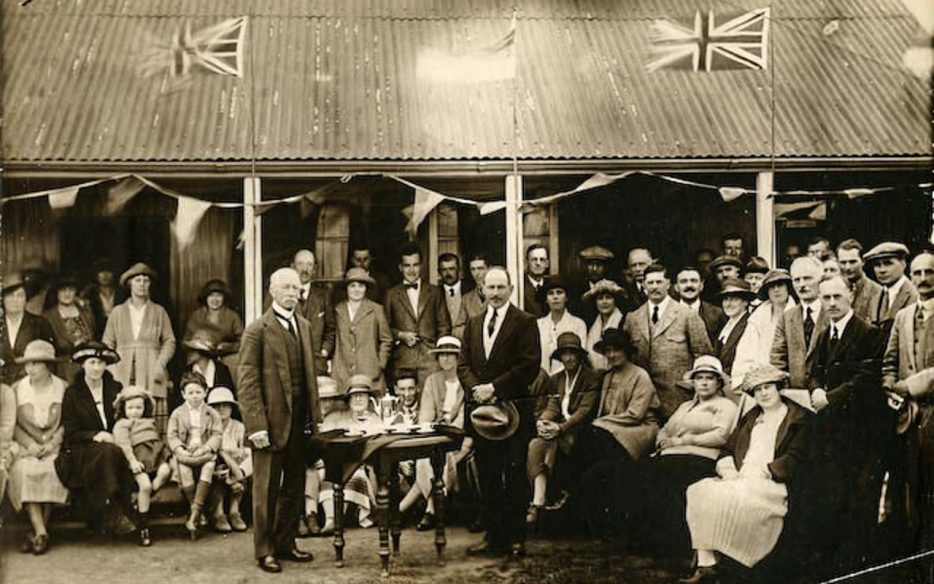 St Austell Golf Club came into being in 1911 when a small band of golfing enthusiasts, led by Mr J. Baragwanath King and Mr F.L. Clunes, laid out a few holes at ‘Rocky Park’, on the western edge of the town.

In March 1913, as the game became ever more popular, the increasing members agreed to approach the Earl of Mount Edgcumbe with a view to leasing land at Tregongeeves and Mulvra farms to lay out an 18-hole course.

By the middle of 1913 there were 14 holes in play, and when, in March 1914, Mr Arthur Roberts relinquished his tenancy on the land at Tregongeeves in favour of the Club, a full 18 holes – some 4300 yards – were soon completed.

From what was to become the first tee the land rose some 80 feet to the top of the hill which is crowned by Taylors Shaft and the Engine House of the Old or Great Polgooth Tin Mine. The ground fell away from this point in all directions.

Disagreement about the way forward hindered progress after the devastation of WW1 but eventually a meeting, held on Thursday, 9 July 1925, was to prove the turning point in the affairs of the Club. The committee’s proposals were far-ranging and extensive.

They introduced the provision of a bar and proposed Sunday opening of the course, and, most significant of all, proposed that the members should consider purchasing the freehold of the Club from the landlords, the Mount Edgcumbe Estate.

In November 1925 the Club was able to seek the views of five times Open Champion James Braid, a prolific course designer.

St.Austell Golf Course OpeningBraid planned several new holes over the area of rough mine wasteland to the south of the course in which all natural hazards were utilised (now holes 13, 14, 15 and 16). He also suggested improvements to other holes where ‘every feature and inclination of the land, even the prevailing wind had been considered’.

It was not until 1936, the Club’s Silver Jubilee, that the course that Braid had laid out was realised. On Saturday, 25 September 1937, the President, Col Cobbold-Sawle, officially opened the reconstructed and lengthened course. The first ball was driven by the Captain, Mr H.I. Saunders.

By 1960 there were still only 113 members, with no professional and no catering during the week. The Steward, Reg Pryor, ran the professional’s shop and also acted as part-time greenkeeper.

In 1974 Mr A. Roberts offered the Club some 16.5 acres of land adjoining the 16th and 18th fairways. The result, completed by 1982, was the creation of five new holes, eight through to twelve, which entailed building four new greens and five new tee complexes, thereby increasing the length of the course from 5600 yards to just over 6000 yards.

Course Expansion Opened April 1982In the early 1990s the Club installed an automatic irrigation system to all greens and tees.

The greens staff have made great efforts over a long period to improve the quality of the playing surfaces, both greens and fairways.