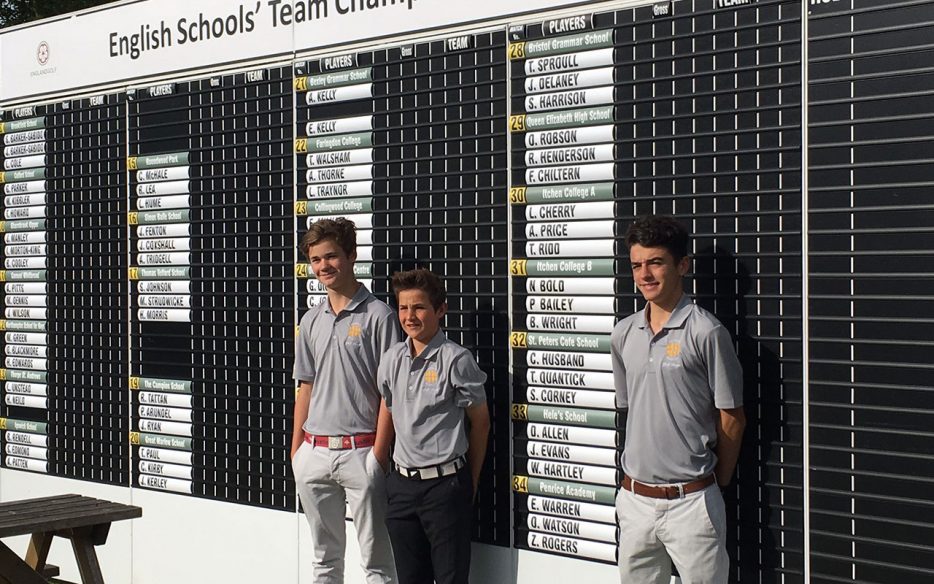 Imagine 3 adults, 3 excited teenagers, a 700 mile journey, 5 sets of golf clubs, an ex DJ and his dodgy sound track, a snake, a strange hotel, and a VW….. Obviously it is a road trip to Woodhall Spa, the home of England Golf.

Due to play the practice round on Tuesday at 4pm, we managed to charm our way onto the course for a much more civilised 10am tee time. The Bracken Course did not disappoint, it was superb – beautifully manicured with long testing tee positions and greens that were true and quick. Little did the players realise that the tees were to be moved further back for the main competition, adding considerable distance to some already long carries!

The actual tournament was played on Wednesday, with young Ewan starting the whole tournament by driving off the first tee. Despite a nervy first shot, his stunning approach shot made for a par 4. This set the tempo for our young Cornishman as he carded a remarkable 39 points, earning an individual 4th place overall! Not bad from 102 golfers!!

Ollie played a steady round after a tough first four holes. After overcoming these initial problems, Ollie produced some great scrambling but was only able to produce 30 points, 6 short of his previous day’s score.

Zac hit what was arguably his finest ever tee shot off the first tee. Despite the adulation from the onlooking female competitors, the tough course and fast greens took its toll, with Zac only managing 25 points.

Taking the 2 highest stableford scores, Penrice Academy led the competition with 69 points for more then an hour but slid down to 5th at the halfway point.

The afternoon tees featured some specialist golf colleges, and experienced teams who were partly responsible for the final position of 11th. However 11th place nationally is not to be sniffed at, as our players conducted themselves beautifully and were a credit to school, club and county alike.’

View and buy photos from  http://www.leaderboardphotography.com/p473683825.