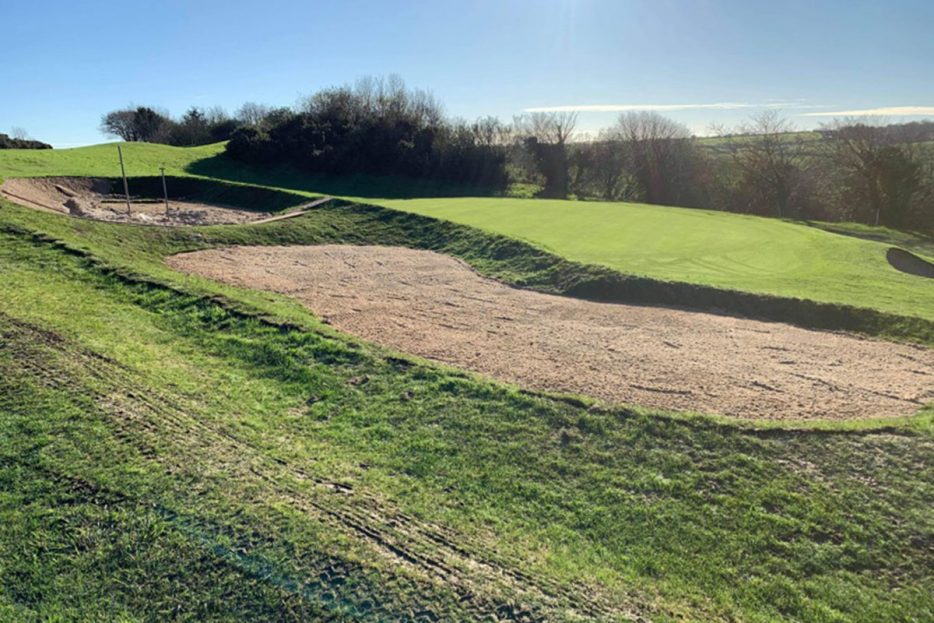 Well I thoroughly enjoyed my first day back zig-zigging the lovely divot-free fairways.

We have enjoyed some lovely weather of late but unfortunately the next few days have some heavy clouds above but I am sure there will still be a grateful buzz of being out again on the course.

During lockdown Vince and his team have been very hard at work and achieved some great results on the work that has been done.

The greens have been tined twice and treated with fungicide and a turf hardening treatment prepare them for the colder months ahead.

They will need to be slit tined this month and then another turf hardener treatment applied. I must say for December that greens are still looking terrific. The hand cutters that we acquired last year will be used to hand cut the greens twice weekly at 5/6mm. 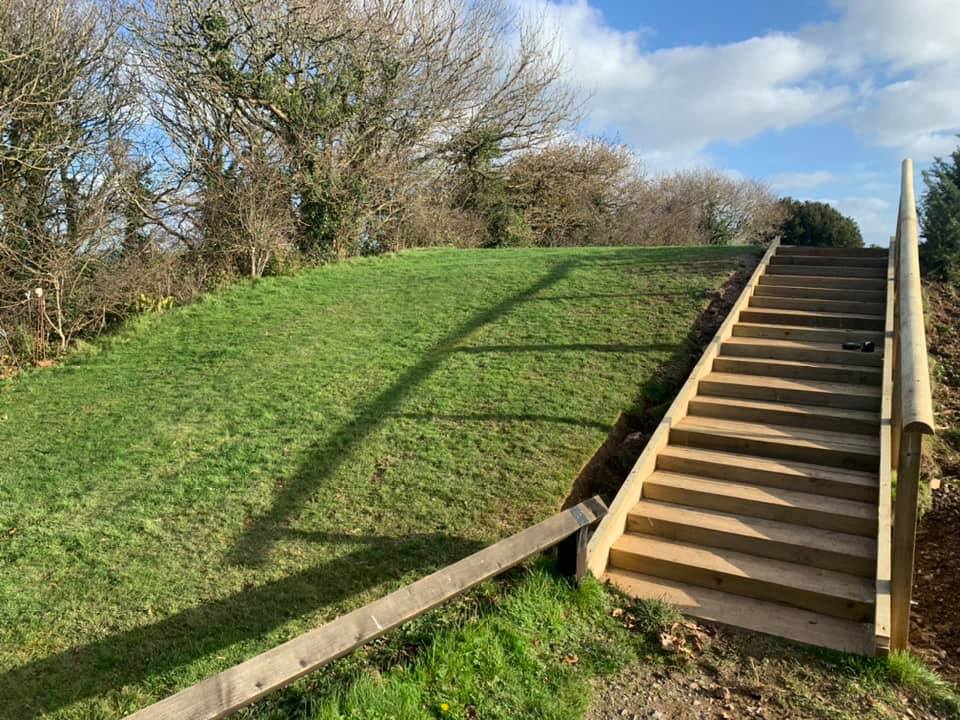 Vince has also completed the steps (Langers Leap) on the 15 th . We just have to install some non-slip strips on the edge of the steps so please can I ask members to be cautious when in use.

With the uncertainty of the weather the team have worked hard in preparing the temporary greens for winter play.

The new 11th and 14th greens have been completed and will be in play once the turfs have settled and we some growth. A lot of banking has been added to the temporary greens to make them fairer for play and the gorse on the fourth and 13 th has been cut back so that players can see the temporary greens.

Work on the reshaping of the fairways throughout the course has continued to show good results.

The grass bunker area between the fifth and sixth fairway has been de-stoned and reseeded with drainage added to the two lower bunkers. 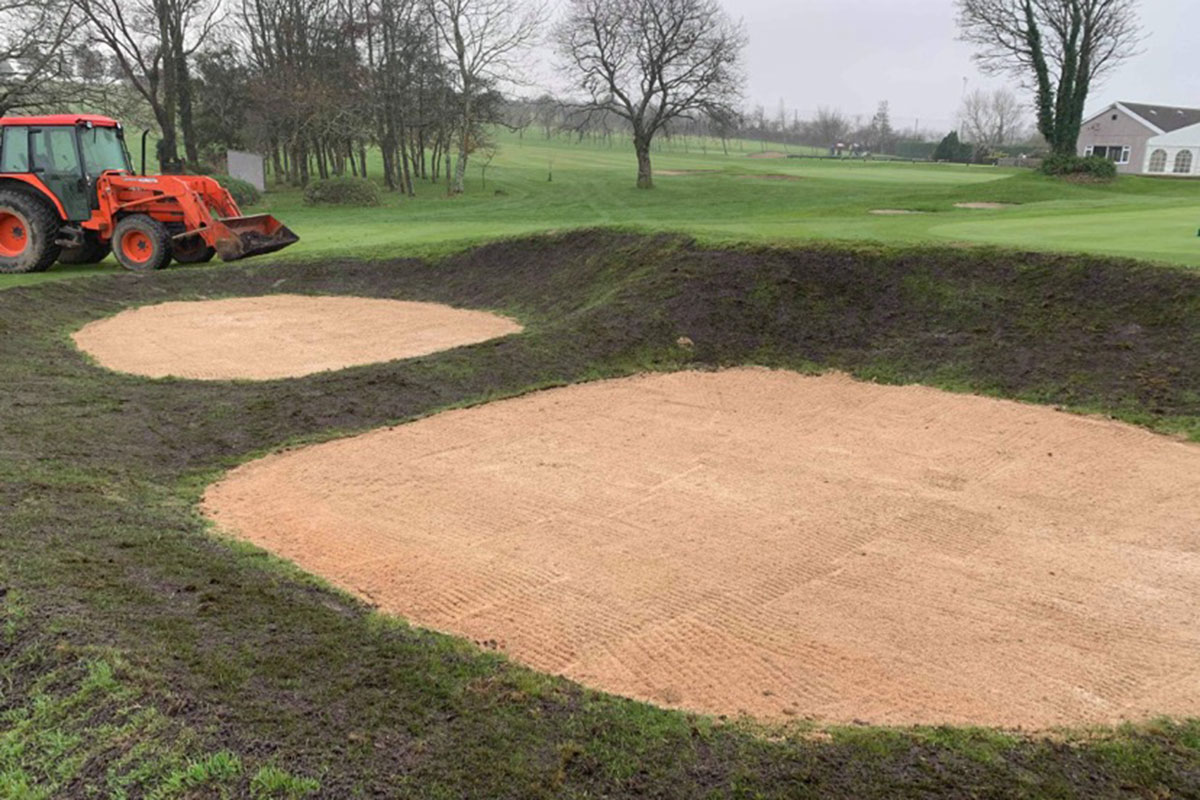 Vince and his team have done a great job in re-shaping the front-left hand second and the large front ninth bunkers, which were both requested by members.

The bunkers are now more easily manageable and hopefully will not wash out with your ball all ending up in the same area of the bunker. The sand in them is now much leveller thus allowing golfers to be able to play out of them fairly.

Many thanks to Ross Facey for helping us source some new bunker sand that we will be introducing once the bunkers have dried out. In the meantime we will be sieving some of the greenside bunkers that cause damage to the greens and surrounds.

We are having some problems with our old fairway mower that is leaving lines on the fairway and now struggling to keep up with its cutting requirements so we will be looking at a replacement in next year’s budget.

Good machinery is vital to keep the course in pristine condition and we have withheld replacing machinery during these difficult times to keep costs down. However in the coming years we will be requesting to the membership a programme of replacement of our dated-course machinery with an addition of a new tining attachment to aerate and help improve drainage to our fairways.

May I say we have had a fantastic response from new and existing members who have donated their £50 in order that we can complete the path on the first tee complex. This just goes to show what a great members club we have at St Austell .

Thanks also to our Whist Club who have also contributed funds to the first path. I am further greatly pleased to inform members that thanks to the generous donations of Shaun Harvey, Steve Damerell and Andy Allum and their companies we will now have enough money to complete the first and ninth, 11th and 12th pathways.

None of this would of course be possible without the voluntary work of Glyn Swiggs, our captain Gary, Gary Johns, Cliff and all the helpers that are doing a fantastic and very professional job for us the members.

The next batch of new trees will be planted out shortly with the help of Steve Omlo.

Vince and his team will be now working on the preparation of the pathways and sieving some of the greenside bunkers, weather permitting.

Just one last request, can I please ask members to replace divots, repair pitch marks and stay outside of the white disk markers on the approaches to greens so that we can keep our course in a great condition.

I hope we all have an enjoyable and healthy Christmas and that 2021 will bring all our wishes.