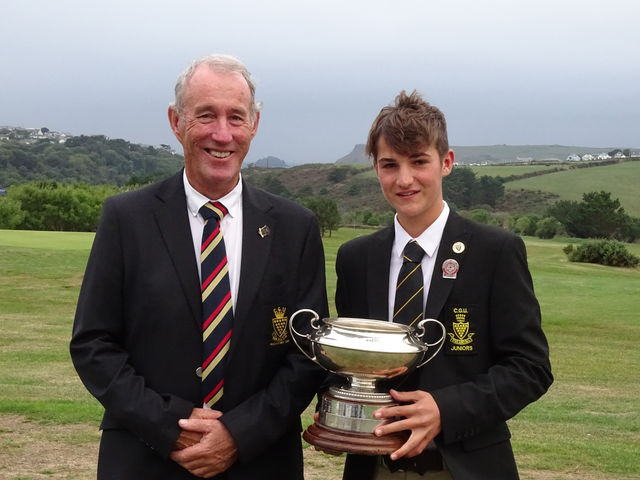 St Austell and Cornwall junior team member Ewan Warren added to his rising pedigree yesterday as he claimed the CGU Depot Cup at The Point at Polzeath GC. In the competition for club scratch champions from across the county 16 year old Warren, who was a member of the Cornwall team which recently played in the England Golf Boys County Finals in Durham, returned a 3 under par 69 total to comfortably win the medal strokeplay event. Warren is pictured above with CGU President Mike Ellis.

Warren opened with a birdie 4 at the first and followed this with another at the 6th. An excellent opening nine was capped with an eagle 2 at the Par 4 8th hole as Warren reached the turn in 4 under. There was just one dropped shot across his card and that came at the par 3 12th.

Warren’s 69 was the best round of the day by some margin with the next best gross score, a 73, coming from Matt Milburn (Newquay) who was playing in the handicap champion’s element to the day. Jack Mewton (Truro) was runner up in the gross as he returned a 75 with Ryan Curtis (Bude & N Cornwall) third on 76, alongside former County Champion Conor Wilson (Perranporth) also on 76.